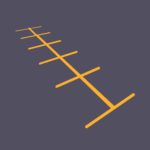 The RepeaterTool is a node that acts as a vessel for the parameters related to repetition. The parameters use parameter expressions to describe the effect that altering any value should have on the other parameters. For example, if you increase the Bay size, the overall Size is reset to Bay * Cells.  As a parameter source for both 2D and 3D Repeaters, the RepeaterTool node does not generate any Shapes of meshes in its own right. 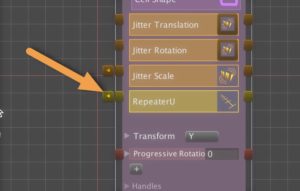 The “display source” button for an input parameter.

When the Size is modified, the ActualBay is recalculated until it diverges too much from the Bay value, at which point a new bay is added or removed, changing the Cells value. In this way, adjusting the Size allows you to make a building longer while adding windows, rather than stretching out the space between the windows.

The RepeaterTool has two SceneView PointHandles on the out edges of the repeater that you can drag to adjust the size, as shown in the GIF above.

The Bay refers to the desired size of each Cell in the repeater. You can think of the Bay as the distance between columns in a building. As you change the overall Size, the RepeaterTool will try to maintain that Bay size, adding and deleting cells as needed.

Adjusting the Bay Size will make the ActualBaySize equal to it and automatically adjust the Size without changing the Cells count.